#JUNGLEvsRENO battle event takes place Sunday, March 15th in Reno, Nevada, at Jub Jub’s. Doors are at 8pm, it’s an 18+ event, & only $5 cover. Come see some of the best California battlers against the best of Reno for the biggest 775 Battles event to date. 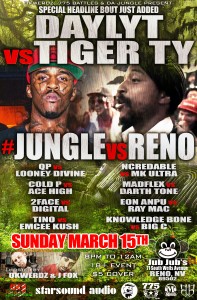 Mauzarotti: How was 775 Battles started?

Dan Hubbard: In 2010, I was doing a tour with Luckyiam of the Living Legends, Lush, & Cadalack Ron. I contacted some locals and set up a few battles for them to watch. The battle scene in Reno has been around and I was a part of various battle events for years. We had a lot of interest the first event & just rolled with it. As long as Reno’s talent wants to be a part of 775 battles we are here to help. I’ve done tour dates with Okwerdz so he was a perfect fit to help establish our local battle scene. We’ve had over 400 battles from emcee to drum battles. We’ve had guest judges from The Saurus to Iron Solomon, we even had Keak Da Sneak randomly show up and judge a freestyle tournament one time.

Mauzarotti: can you give a background on Da Jungle and it’s affiliation with URL?

J. Fox: Da Jungle started with me just trying to get a couple of my friends heard because other events clearly weren’t rocking with us like that. After a couple events, we ended up making a lot of noise because of the talent we had & the URL affiliation. Smack himself said he wanted to help out with my events! I was on the West Coast pushing a street battle rap league so he stamped it, & helped promote events, which helped a lot as he uploaded some of my main event battles… so all around it was a good look.

Mauzarotti: How does this event different from other 775 Battles you’ve hosted? What should the public expect to see?

Okwerdz: Right out the gate its an official collaboration event with Da Jungle so you are gonna see a few different things

almost like a hybrid of both scenes, I don’t even know what to expect 100% myself! The event will still have that 775 Battles feel, at the usual venue, with the same awesome fans. It’s also expanding at the same time in cross promoting with our brand/fanbase, some new faces that haven’t been seen in Reno yet so it should be ultra packed, & a new experience for everyone! We’ll also be stepping up the presentation a bit, everything will be filmed on our equipment so emcees will get the opportunity to have some high quality battle footage of themselves, possibly even get it released through one of our platforms on YouTube that gets high traffic, & will expose them to new potential fans if their battle turns out good enough. The scene in Reno has been growing for years so the next logical step for potential talent there is continually challenging themselves, & see where they stand with the rest of the battle scene. This is an exciting moment and at the same time we get to showcase Jungle talent who are definitely some of the very best to step foot into the 775 Battles arena. You can expect emcees on both sides to be at their hungriest level to advance themselves & its gonna be a fun night! We appreciate the city of Reno for having us & we are gonna put on a real show for y’all, but make no mistake, Da Jungle is taking it very serious, & they are coming to win!”

Mauzarotti: How has battle rap changed since your career began & is it good change? Thoughts or comments on your upcoming battle vs Looney Divine?

Qp: I’ve seen battle rap gravitate towards a style that myself & sons personally created with the excessive wordplay, nameflips, schemes slow it down with repeat bars… honestly, I think it has watered the market down with all these emulated, simulated battlers. As far as my battle with Looney, I am very honored to jump in the ring with a top tier female rapper! I can promise you this, the material I’ve put together is probably the best of my career, it will be a long evening for that lady… Jungle stand up, 209 in this bitch!

Mauzarotti: Why did you become a battle rapper? Thoughts or comments on your upcoming battle vs Eon Anpu?

Ray Mac: Free exposure Lol!! It started out as a way to gain more stage presence for live shows. Freestyling, recording, battling, they are just more tools in the bag of tricks for any real emcee. Just another way to separate myself from the pack, there’s too many mother fuckers raping now a days. Q2. DEATH NIGGA!

Mauzarotti: What’s your favorite city or event you’ve battled in? Thoughts or comments on your upcoming battle vs Darth Tone?

MadFlex: Anywhere you get love makes for a good visit. San Jose has become like a second home for me to battle in so I always enjoy it out there. Out of the states, I’ve met a lot of great folks in the Vancouver area. Darth Tone is the truth. More well-rounded & dangerous than a lot of dudes with bigger names than him, hould be a pretty wild battle.

Mauzarotti: Having traveled for battles, do you prefer home or away, and why? Thoughts or comments on your upcoming battle vs Ncredable?

MK Ultra: I like performing in & out of town so I don’t really prefer either. In town is rad to show my city what I’ve been doing & hold it down for my town. Out of town is dope because I get to showcase my talent to different people in a new area & its gives you a little extra push to do well. Ncredible just got put on as a fresh coast KOTD Rep for his recent BOTB performance so this is a big chance for me to show everyone, including myself, what I’m made of. I think he’s dope but nothing I can’t handle, I’ve been showing up better & better every time, so this time I’m really coming with something to prove. 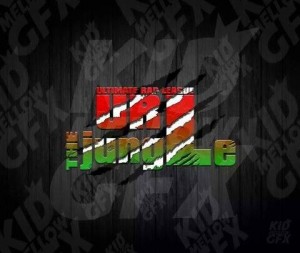 Mauzarotti: Why did you become a battle rapper? Thoughts or comments on your upcoming battle vs Digital?

2Face: I started battle rapping because I always love the feeling of a group of people watching when I’m gassing or whoever is rapping at the time. I love to watch battle rap as much as I do competing, I really come from the music side of rap,& I can compete with any artist on a beat (in my Freeway voice Lol). I’m still molding myself into a real battler, but I’m almost there! Thought on this battle coming up is I respect all battle rappers, but I’ve faced much harder opponents, & I just came off a tight close battle with P Nut. I’ve battled QP and AB so this guy nothing, he can’t out punch me, his lyrics don’t match up, he’s funny, but that cant compete with bars as I learned against QP… he can’t out joke me either so I see it going 3-0 2Face!

Mauzarotti:  Where do you see battle rap in 10 years? Thoughts or comments on your upcoming battle vs MadFlex?

Darth Tone: Honestly, it’ll probably just be another dying out sport due to over-saturation, but hopefully not. I know there’s a lot of people working on keeping the culture alive not to mention the handful of up & comers that spend countless nights studying up on their history to evolve the future. We’ll just have to see… Shwahlute! I’m excited! Madflex got Mad talent, I’ve witnessed him in battle mode a few time, & he’s never disappointed. Come out expecting a slug fest folks. Vaded

Mauzarotti: Where do you see battle rap in 10 years? Thoughts or comments on your upcoming battle vs Ace High?

Cold P: All watered down in commercial like the music industry in 10yrs straight up brudda! Da jungle can take satisfaction in bringing so much to the table when it was pure raw & competitive.

Mauzarotti: What advice can you give an up and coming battle rapper? Thoughts or comments on your upcoming battle vs Ray Mac?

Eon Anpu: Stay competitive, try to evolve after each battle, & my next battle will bring fear to my opponent. I’m going into the battle to win, I know we gonna be in Reno, but Ray Mac is gonna feel like he was battling in Oakland!